Taking Pleasure in Our Mysterious God 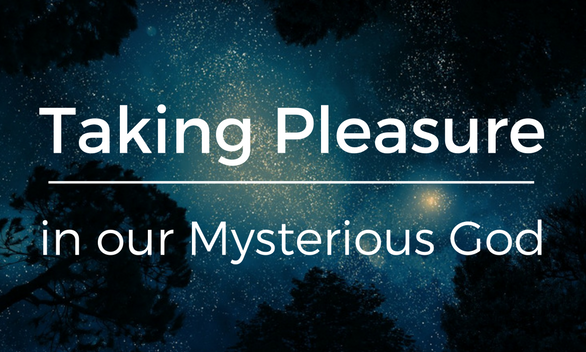 We live in a society that loves mystery, exploration, and backstory. I remember watching the TV show Lost and seeing just how excited people were to talk about this show. “What’s really going on? What’s going to happen? What is the Island really?” And I also remember the tremendous disappointment when those questions were finally answered in the series finale. People were so angry, many claimed to even become depressed because they didn’t like the answers once they finally came. For most, the show would have been better if we had never gotten the answers that we claimed we wanted. It struck me as I was working on our current series on Revelation just how mysterious God is in the whole book. God is present in the book, but he isn’t visible. He is veiled by light, He is present but not really seen in any concrete way. He is described, but not comprehended.

One of the most important theologians in the history of the church was Thomas Aquinas. Among his contributions to theology was his insistence that we never really know Who God is, directly, in and of Himself. Instead, the best we can ever do is to know Him by analogy (or comparison). What Aquinas meant was that we understand Who God is by comparing Him with things that we see or understand from the world around us. And what this means is that everything that we say about God is partly the same and partly different from what we mean when we say the same thing about creatures.

For example, when I tell my children that God is omnipotent, they want me to explain. “Well,” I say, “it means that God is all powerful.” And so maybe I might explain more to them: “You see, you know how the most powerful people on earth can do a lot of things that they want? Well, God is like that, only He can do everything that He wants.” And so when we think of God’s power, we come to understand His power by comparing Him to shows of power in our own world.

To describe God we end up saying things such as “God is like this, only more.” Or “God is like that, only greater.” And we end up knowing or acknowledging Who God is by comparing Him imperfectly with things that we know around us. But we never can and never will get at a full, perfectly down-to-the-wire accurate understanding of Who He is. We can never comprehensively know or understand God.

And what this means is that even when God tells us about Himself, there is still a huge element of mystery to who He is. And we see that in Revelation chapter four.

This passage shows us God’s throne room, but it never really shows God directly to us. The closest it gets is when it tells us in verse three that the one on the throne had an appearance like jasper and carnelian. Jasper and carnelian, among other things, were used in making the signet rings of kings in the ancient world. What John is doing is comparing God with the kings of the earth who, by right of their signet rings, exert their power on earth.

When you think about the One on the throne in this passage, when you think about the sea of glass and the living creatures, even if you don’t understand everything that’s going on, one thing I am certain of is that the mystery of God and Who He is actually deepens. And the more that mystery of God deepens, the more that figure on the throne becomes Someone you want to look at more closely.

And that’s the way it is supposed to be with God. The more we know God – the more He shows Himself to us – the more we are intended to be dumbfounded and struck by how incredibly daunting God really is.

This, of course, causes us to lean in and pay more attention. Unlike the mysteries in the world around us, the mysteries of God will never disappoint us. When people finally had their answers after the finale of Lost, they were disappointed by what they saw and what they learned. The difference between God and that sort of mystery is, first, that when we do know God better we will be more delighted. The second difference is that while we may figure out what happened on a TV show, we will never fully plumb the depths of God and Who He is. We will never run out of questions. We will never get to the bottom of God and Who He is. He is an infinite well of joy, pleasure, and mystery.

What a glorious thing it is to remember that our God is ultimately unfathomable. This should cause us to worship. But it should also make us grateful that He has revealed Himself to us at all through the prophets, through His Son, and in the words of scripture as well. My prayer for us is that we all take pleasure in our mysterious but knowable God and that we continue to run to Him and rest in Him.