Luther and the Madness of Forgiveness 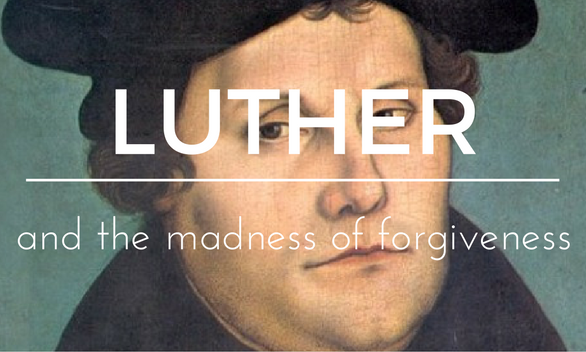 The current year is 2016. The Reformation is largely understood to have been initiated when Martin Luther nailed his 95 Theses to the Wittenberg church door in 1517. Yes. For those of you who are better at math than me, that means that the Reformation is 499 years old this month.

Central to the Reformation were two core issues: the authority of Scripture, and the doctrine of justification by faith alone. To us these seem like doctrinal – perhaps even scholarly issues. The sort of things that the professors and seminary students ought to worry about in their smoke-filled rooms while ruminating on philosophy and other useless things.

The reality is that the Reformation didn’t start out as some sort of heady discussion that was only for the “elites.” Instead, it really began as the personal struggle of a single monk to believe that the holy God of the universe really loved him. And yet Luther was so fundamentally aware of his own sinfulness:

I was utterly stupefied and terror-stricken. I thought to myself, “With what tongue shall I address such Majesty, seeing that all men ought to tremble in the presence of even an earthly prince? Who am I that I should lift up mine eyes or raise my hands to the divine Majesty? The angels surround him. At his nod the earth trembles. And shall I, a miserable little pygmy, say ‘I want this, I ask for that’? For I am dust and ashes and full of sin and I am speaking to the living, eternal, and the true God.”

How could a holy God love someone like Luther!? This was his struggle. The system of salvation taught in the Roman Church even during Luther’s time was very much a treadmill of works for a God who could never truly be satisfied. He would never truly be good enough, no matter how hard he tried. He needed something that would truly answer his heart’s need, and Rome couldn’t provide it.

The truth that rescued Luther wasn’t found in the teaching magisterium of the Church in Rome. It was found in the Scriptures; in the words of Paul when he said that “a person is not justified by works of the law but through faith in Jesus Christ” (Gal. 3:16). The reality is, God is the one who justifies the ungodly. People like you and I, who know our guilt, who are so very aware of our fallenness. This truth was so important that Luther declared, “If the article of justification be once lost, then is all true Christian doctrine lost.” And if it be lost, what hope do you or I have in the presence of such a holy God?

The truth is that because of justification by faith alone, the All Terrible toward sinners becomes the All Merciful in Christ. This is a personal and deep truth that affected Luther to his very core and not only changed him from the inside out, but transformed the world forever, reminding us all that even today God is changing the hearts of sinners, showing himself to be both just and the justifier of those who trust in Him.

Luther was once asked by one of his parishioners why he kept preaching about the Gospel. Why not move on to other things? Luther is said to have responded, “I keep reminding you because you and I keep forgetting.” Let all of the saints of Pearl Presbyterian Church be so aware of our own need of a Savior that we never grow tired of hearing the mad truth that Christ came to die for sinners. The world is full of men and women who need to hear the message that in Christ there is forgiveness of sins. Let us all remember that each and every person we meet is a person in need of that truth.