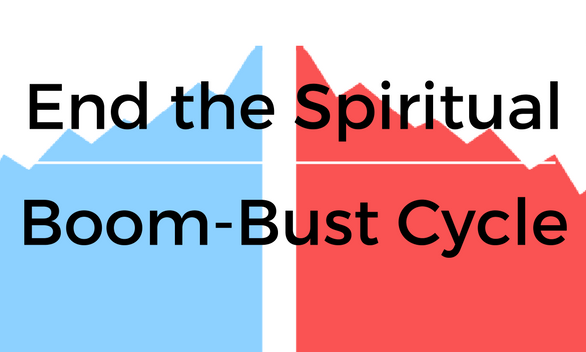 There was a short season where I was very interested in economics. One of the things I started to learn during that season was that our economy in the United States has become very much addicted to a cycle of booms and busts. What do I mean by that? What I mean is that the economy has a way of getting over-excited about certain stocks, watching them build up, only for those stocks to plummet (as I understand it this is called a “correction”). And in a large interconnected economy it isn’t just certain stocks that are affected by these corrections, but really the whole economy is effected. Hence, the Great Recession of 2008 is largely blamed on toxic home mortgage loans. When the market corrected around those home loans, the whole market was hurt, and many lost massive amounts of their retirement savings that they had spent years putting away.

Most experts seem to agree that the boom-bust cycle is not ideal, but it is what we’ve lived with for the last hundred years or so in the United States. I wonder how many of us as Christians have decided to live with a boom-bust cycle in our spiritual lives.

When I was a teenager I wasn’t a Christian yet, but my dad would always take me to these big “events.” Promise Keepers was really big back then. He would take me with him, and he would take his friends to these events. And it never failed, when we returned from Promise Keepers he would be on a spiritual high. He’d be reading his Bible and walking around the house singing to the Lord, only to fall off within a few days, returning to what I would describe as “normal” life.

How many Christians are looking for “high points” and “events” that will leave them spiritually satisfied so that they can feel a spiritual “high” that will carry them through the next season? I find myself thinking this way at times. As the teens were preparing to leave for RYM in Florida this summer I caught myself praying something like this: “Lord, I pray that you would reinvigorate our teens with a newfound excitement for you through the ministry of RYM.” It isn’t that a prayer like this is bad or ill-intentioned, but what all of us need, as Christians, is not another high point that will reinvigorate us. What we don’t need is another “event” that will leave us enthusiastic for a season only to drop off. God’s intention for us is the ordinary, plodding, sometimes repetitive cycle where we are engaged with the means that God has given to us to grow.

In Paul’s first letter to the Thessalonians, one of the things he thanks God for is their “steadfastness of hope in the Lord Jesus Christ.” This word, “steadfastness” is key here. This word points to an unwavering, constant, ongoing cycle of hope in Jesus that doesn’t shift and sway seasonally. The key to being steadfast isn’t in the boom-bust spiritual cycle, it’s in the ordinary, steadfast, weekly practices of a disciple.

I have a plant in my office. And that plant does not get the attention from me that it deserves. It soldiers on, but sometimes I forget to water it. In fact, I’ll go through seasons where I only water it once, but to make up for it I’ll put a lot of water on it. Of course, the water just runs out the bottom and makes a mess, because there’s only so much that a plant can hold. The right thing to do is to water it, and do it daily, a little bit at a time. Not more than it can take at once. That’s what our souls need, too. Ordinary, daily, feeding. What you and I need is not one huge event that will shock us out of spiritual apathy and carry us for another season. God’s intention for us is ordinary, weekly hearing of the Word. And if the Word is preached evening at our church, then God has also given you a chance to hear his Word twice a week, at least.

There is something better for us than a spiritual boom-bust cycle where we have an artificial enthusiasm that lasts a season, but then drops off. God wants our spiritual lives to be grounded in Jesus Christ. That means that our spiritual lives aren’t based in things that change and waver.

If spiritual health is grounded in Christ, what is it that God has given us to ground us in him? He’s given his Word, which we can hear weekly from the pulpit, and daily in our own reading. He’s given his Spirit, who helps us when we read and hear God’s Word so that it means more to us than just words. And he’s given us his Son, whom we feed on each time we have the sacraments together as a church. You see, God’s already given us all that we need to have spiritual lives that are constant, healthy, and ongoing – not seasonal.