Died He For Me? 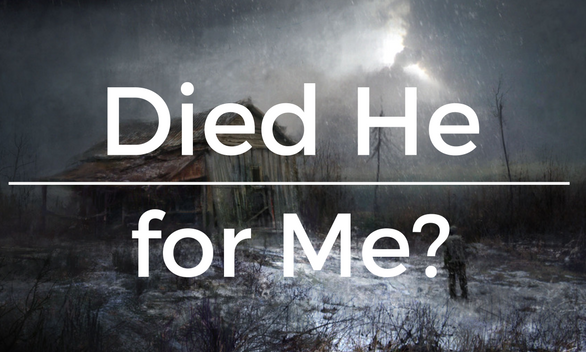 The Easter season is fast upon us. In anticipation of a series about the suffering and death of Jesus, I have been thinking a lot about the idea of the atonement of Jesus. The idea that Jesus suffered and died in our place may or may not be a new thought to some of us, but many in the evangelical world recoil from the thought.

In theology-speak we call Jesus’ death on behalf of others penal substitutionary atonement. It’s penal because it regards punishment for wrongdoing. It’s substitutionary because it’s in the place of someone else (Jesus died for the sins of others, not himself). This is something we’ll talk about when we get to John 19 in a few weeks, so I won’t belabor the point. Penal substitution is something that is in our church confession, and it has been standard Christian teaching for centuries. However, there are some in the evangelical world that deny it.

I’ll give you just one brand new example. You may have heard of the book The Shack. It was recently made into a movie. Well, the author of that book, whose name is William Paul Young, has written a brand new book that only came out last month called The Lies We Believe About God. One of the lies he says we believe about God, is that “The Cross was God’s Idea.” In that chapter, he very strongly rejects penal substitution. Here is what he says:

Who originated the Cross? . . . If God did, then we worship a cosmic abuser, who in Divine Wisdom created a means to torture human beings in the most painful and abhorrent manner. Frankly, it is often this very cruel and monstrous god that the atheist refuses to acknowledge or grant credibility in any sense. And rightly so. Better no god at all, than this one.

It almost hurts to read something so blasphemous. He would rather God didn’t exist at all than the way he has revealed himself in Scripture. That’s no small thing. And this means that asking the question of what is happening at the cross is very relevant and important for us. These are things people still care about – and rightly so.

All of this, of course, leaves us asking the question, is William Paul Young right? Is the cross really abuse? Is that a fair way to talk about penal substitutionary atonement? Well, on the one hand, even if you grant that he’s right, then it still misses that all of Jesus’ life was a life of abuse. Jesus’ suffering wasn’t restricted to the cross.

Let me give a few reasons why William Paul Young is wrong about penal substitution:

First, having a preference for God to be a certain way does not make it so. R.C. Sproul used to talk about a plaque that he had which said “You are required to teach and preach what the Bible says, not what you would like it to say.” That is an important place to start. Anytime someone says something like “Better no god at all, than this one,” we know that we are reading a person who is not open to the teaching of Scripture. Even if it did teach penal substitution, an attitude like that would never receive it! We need to always ask God to make us willing to receive Scripture in all its teachings. Talking about God requires modestly receiving what he tells us.

Second, the language of abuse isn’t helpful (and that’s putting it mildly). Scripture never uses that term or anything like it to describe Christ’s sufferings, nor do any theologians that I’ve ever heard of. This way of talking is meant to create an ugly caricature in the mind, and the intention of it is that no reader would want to admit to holding it, regardless of whether it’s true.

Third, besides being unhelpful language, it misses the fact that Jesus Christ willingly came to the cross. Peter tells Jesus that he won’t die or be killed in Mark 8, and Jesus reacts violently against that possibility: “Get behind me, Satan!” If this were abuse, Jesus would take any opportunity to escape. But of course, he knows that he has to die. He’s already made a promise to the Father, as we see in the High Priestly prayer of John 17. And in John 10:17 he shows us his willingness to do this as well: “I lay down my life – only to take it up again. No one takes it from me, but I lay it down of my own accord.” Jesus is no victim. He is very much in control.

Fourth, not only was Christ willing, but he did it to bring glory to the Father and to himself and to save his people. Jesus’ death was violent and awful. In a sense it was the most unjust and dreadful thing that ever happened in human history. But this language of abuse is just plain wrong. We look to Jesus, “the founder and perfecter of our faith, who for the joy that was set before him endured the cross, despising the shame, and is seated at the right hand of the throne of God” (Heb. 12:2). Jesus endured the cross willingly, and he did it to save his people because the pain of the cross was the price of joy, and he was willing to pay it.

But why suffering? Why did Jesus have to suffer?

It’s important that suffering is part of what Jesus endured because the suffering of the cross is the measure of God’s holiness and justice. Blood and the taking of life has always been God’s way of demonstrating that the wages of sin is death (Rom. 6:23). This is why even in the Old Testament it was sin that demanded the shedding of blood if forgiveness was ever to happen.

The punishment given is proportional to the glory that has been assaulted and the holiness that has been blasphemed every time we sin. God is the greatest, holiest, most beautiful and full being in all the universe. In the cross we’re seeing the depth of God’s own commitment to upholding his good name (Rom. 3:25). When we see the cross, we’re supposed to recoil in horror. That’s the right response. But we recoil in horror because in Christ’s death and suffering, we see the incarnate, innocent, immortal die, and also because in it we see what we deserve.

As this Easter season is upon us, let’s take the opportunity to rejoice in (and mourn over) the fact that the Son was punished in our place. Because of Christ’s penal substitution we can sing with Charles Wesley:

Died He for me, who caused His pain—
For me, who Him to death pursued?...
No condemnation now I dread;
Jesus, and all in Him, is mine.